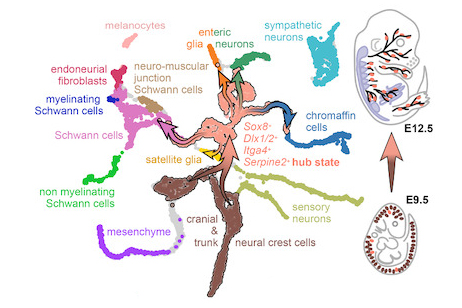 Multipotent stem cells for the treatment of Alzheimer's and Parkinson's diseases

It is a known fact that Alzheimer's and Parkinson's diseases are incurable neurodegenerative disorders that lead to the progressive death of neurons responsible for cognitive and motor abilities. Russia’s burden of neurodegenerative diseases is predicted to increase to 56% by 2030 and exceed the epidemiological threshold of 5% of the country's population by 2050. Currently, dementia alone, caused mainly by Alzheimer's disease, affects around 50 million people globally.

In collaboration with foreign colleagues and using single cell transcriptome analysis, specialists of the Laboratory of Neurogenesis and Neurodegenerative Disorders of the WCRC for Personalized Medicine created a first-ever unique atlas of gene expression of neural crest cells and their successors — differentiated cells with a high number of genes per cell (7000- 8000). Scientists have shown that late-migrating neural crest cells and their descendants, early Schwann cell precursors, have similar transcription profiles and are able to specialize into different cell types (glia, neurons, neuroendocrine cells). These cells can be considered in general as a new cellular material for regenerative medicine and, in particular they might be a cellular source of mature neurons in case of their loss in neurodegenerative disorders such as Alzheimer's disease and Parkinson's disease.

The data obtained may lead to the development of a new approach to the treatment of neurodegenerative disorders associated with the catastrophic loss of neurons in the human central nervous system.

The results were published in journals: