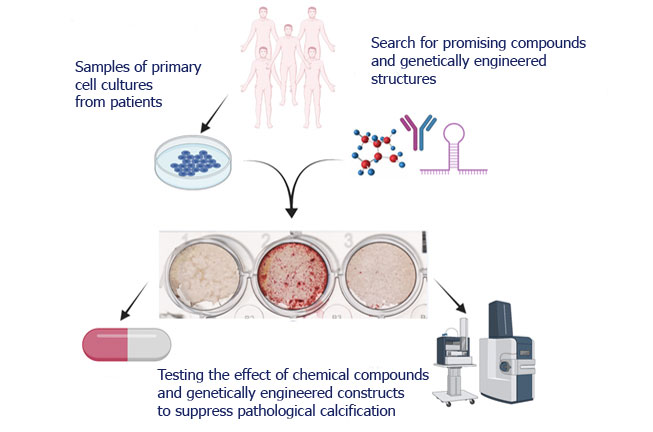 Scientists at the Research Laboratory of Excessive Calcification Diseases of the WCRC for Personalized Medicine have succeeded in creating a unique platform for testing compounds that inhibit abnormal calcification. Diseases with excessive calcification are widespread, especially in aging populations.

Vascular calcification worsens the course and prognosis of cardiovascular diseases and aortic valve calcification leads to cardiac problems. However, there are no drug treatments for these diseases, and, for example, nearly half a million expensive surgeries are performed every year for the treatment of aortic stenosis to replace a calcified valve.

One of the major constraints to the development of therapy is the absence of adequate platforms to test promising compounds. The specialists of the Laboratory created such a testing platform.

To create the platform, they accumulated a collection of more than 100 samples of primary cell cultures from patients with aortic valve calcification, one of the most common types of abnormal calcification. A technology has been developed for growing and testing the calcification potential (osteogenic potential) of these cells. Using the platform during cell cultivation at certain stages the expression of a number of genes associated with calcification is checked, and for a more complete characterization of the pathological process, the proteome of differentiating cells is analyzed. At the final stage, the calcification of the test culture is determined by staining with a substance that reveals the accumulation of calcium in the cells.

The testing platform allows assessing the effect of various substances on calcification: red staining indicates that the pathological process in the cells is ongoing and the absence of staining suggests that the test substance prevents abnormal calcification. Other checks of the effect of the identified substances are performed further at a more subtle molecular level. This platform allows testing substances and genetic constructs with potential anti-calcification effects as well as studying the molecular and cellular basis of abnormal calcification, which in turn is an essential step in the search for therapy.